Are you searching for the best Manga app to read Manga comics online? If yes, look no further. In this article, we have compiled a list of the 14 best Manga apps where you can read your favorite manga legally.

Even though, as a dedicated manga reader, you can’t deny that many manga series are long reads. Hence collecting paperbacks or print volumes might take a lot of space on your shelves. Therefore, it makes sense to read online.

For a long time, the manga was neither legally translated into English nor available digitally. Most of the manga content available online was illegitimately scanned and further translated to English.

Luckily, things have improved now. There are many apps out there where you can read manga legally. So, you don’t have to depend on these illegal sites anymore. But, now, the question arises: What is the best manga app?

Well, to make your choice easier, keep on reading to know which app is the best manga reading app! 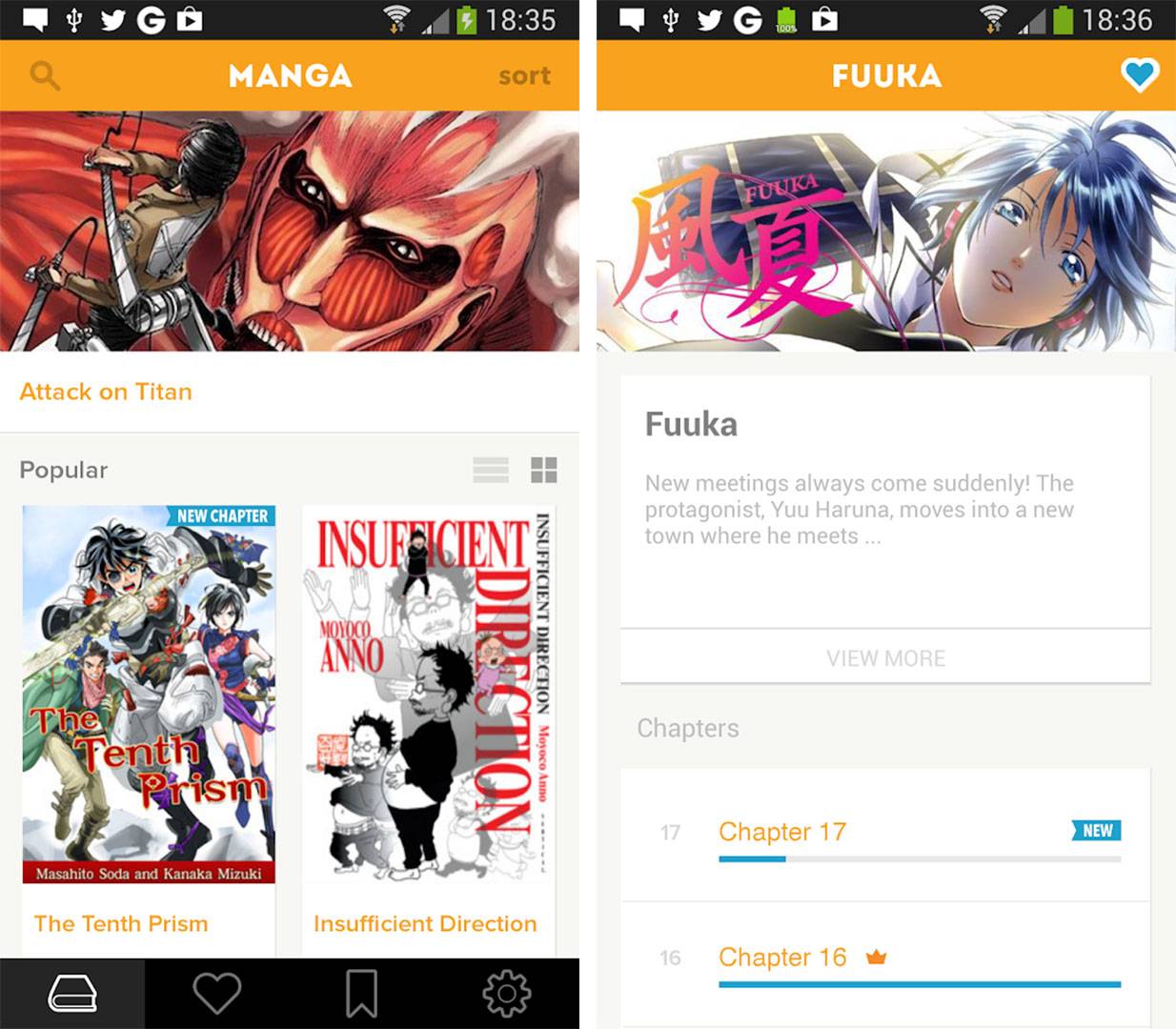 Crunchyroll is a leading streaming service, but it also takes the first position in our list of the best manga apps with its ‘Crunchyroll Manga’ app. It offers unlimited access to a variety of the latest manga emerging from Japan. Crunchyroll Manga users can read the latest from hit titles like Attack on Titan, Fairy Tail, etc., as soon as they hit the stands in Japan. 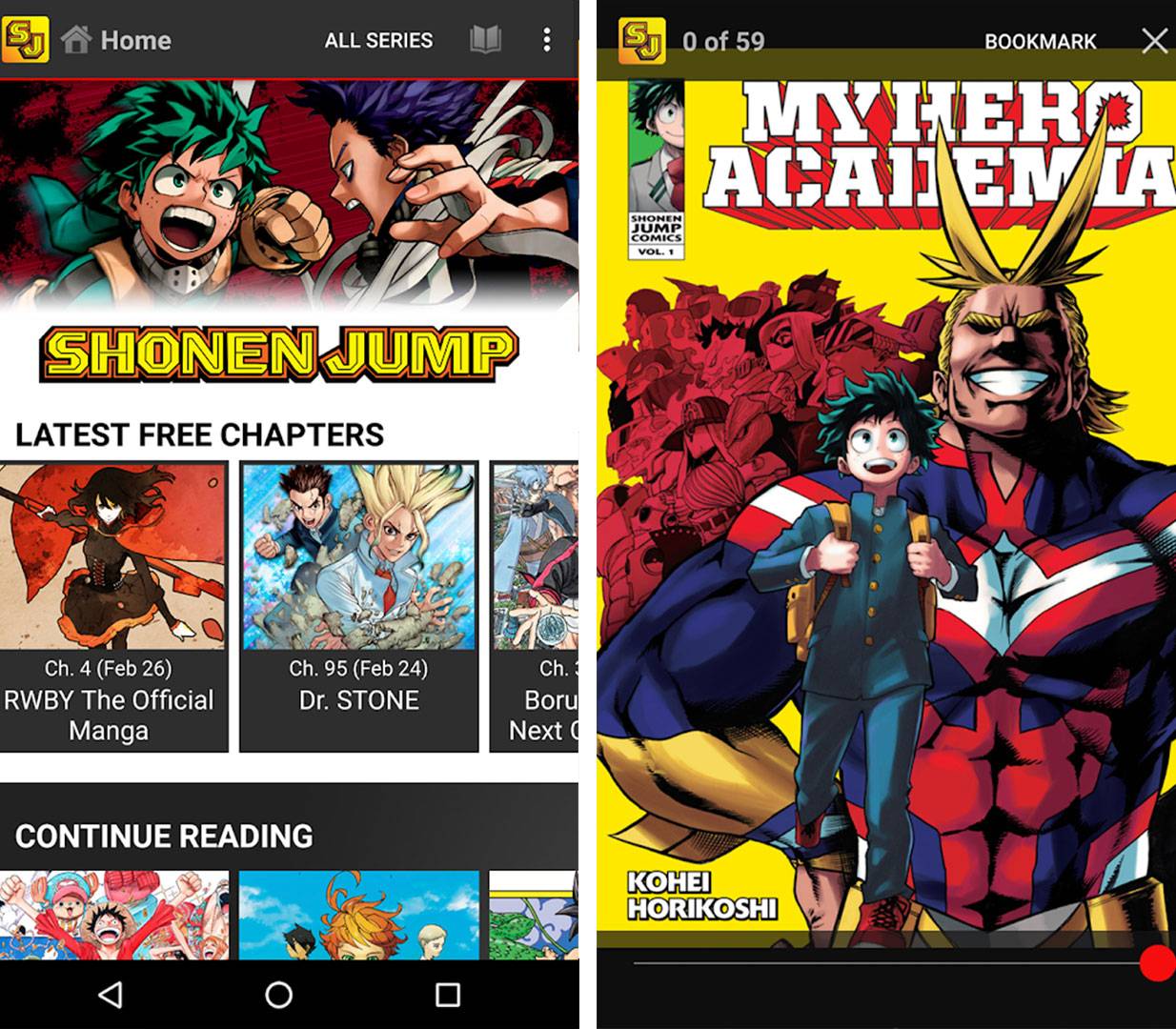 The next one on the list of best manga reader apps is Shonen Jump. This popular manga mobile book provides a way for manga fanatics to catch up on their missed chapters. It features several hit series like Jujutsu Kaisen, Demon Slayer, My Hero Academia, Bleach, Naruto, and more in English. The shonen Jump app is your legal and most reliable source to read the world’s most popular manga and comics from Japan.

Price: Its paid plan costs only $1.99 a month. You can try its 7-day free trial before subscribing to it! 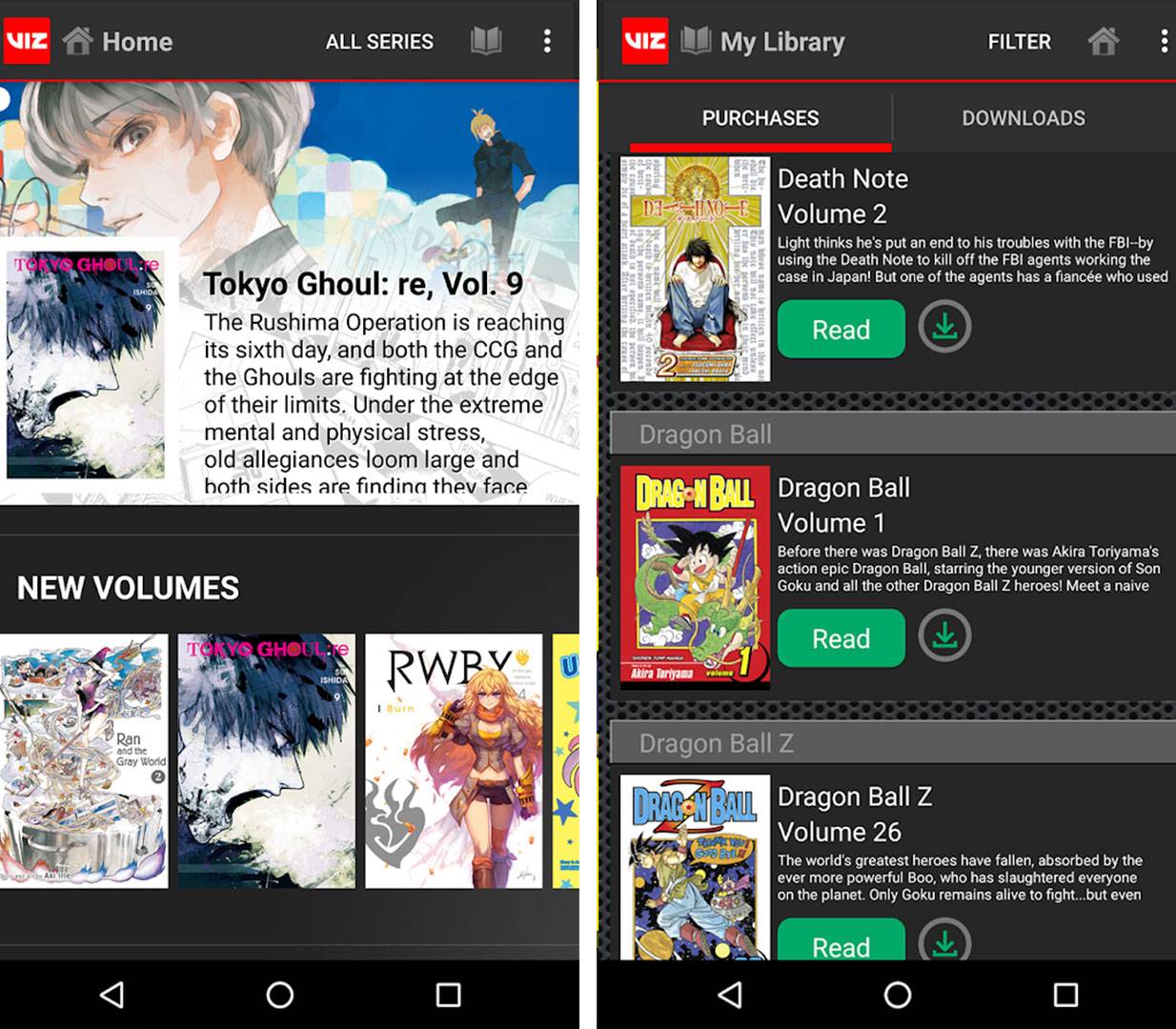 With the VIZ Manga app, you can read unlimited English-language manga with hundreds of titles across a wide range of genres. Inside the app, you’ll find popular titles like One Piece, Tokyo Ghoul, Naruto, One Punch Man, and some of the biggest manga titles by VIZ.

Price: For just $1.99/month, unlock up to 100 chapters every day. You can try its 7-day free trial before purchasing a membership. 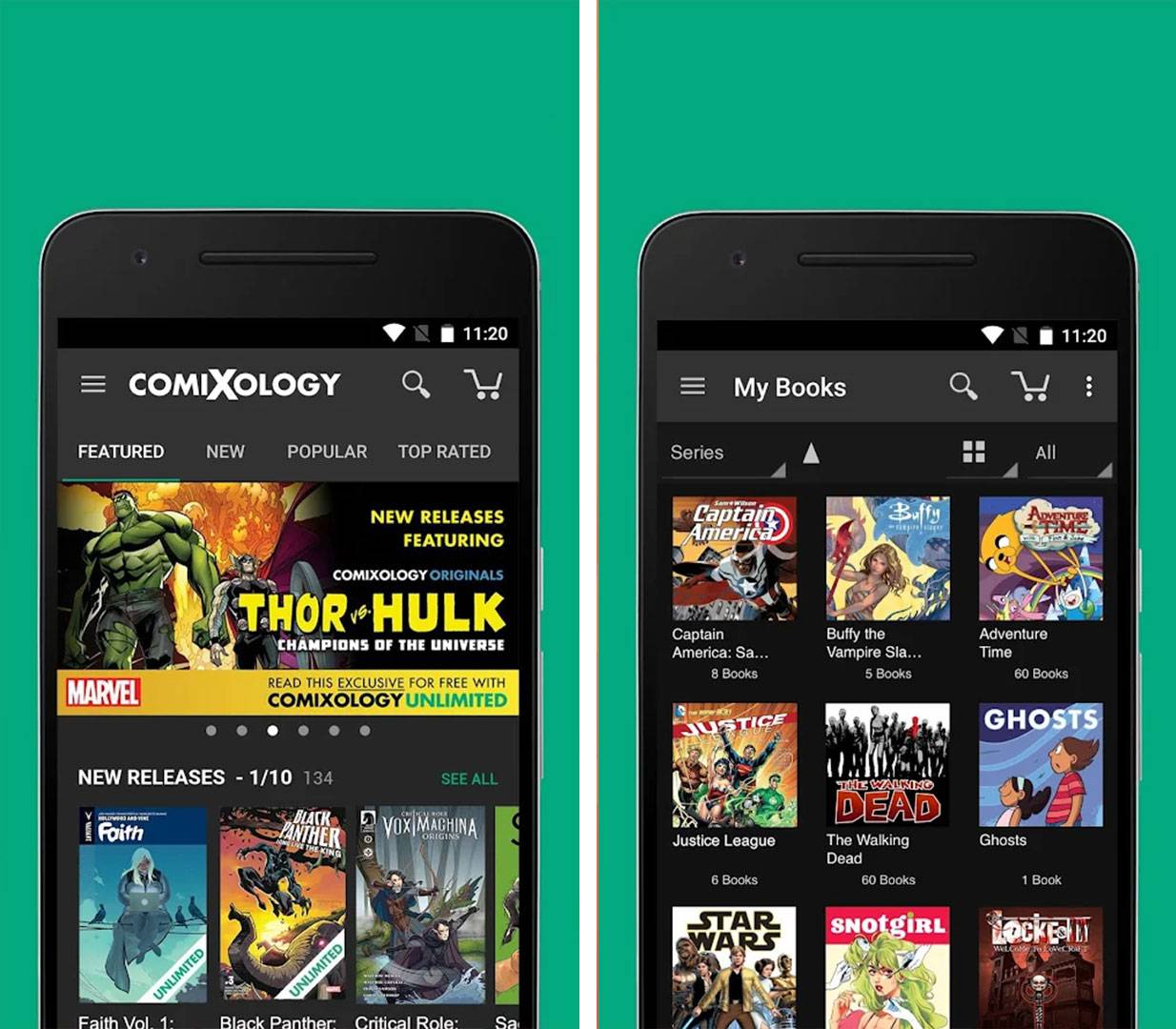 Comixology is our next pick for the best manga reader app. It offers manga and over 100,000 digital comics and graphic novels from DC, Marvel, Image, and more. When you download the ComiXology app, you will get instant access to several titles, including Attack on Titan, Vinland Saga, My Hero Academia, twin star exorcist, Naruto, and many more.

Price: ComiXology is completely free to download. But, if you want to read any comic, you’ll have to purchase it. On average, the price ranges from $2.99 to $3.99.

And its new service–ComiXology Unlimited lets you read thousands of titles just for $5.99 a month, which you can cancel anytime. 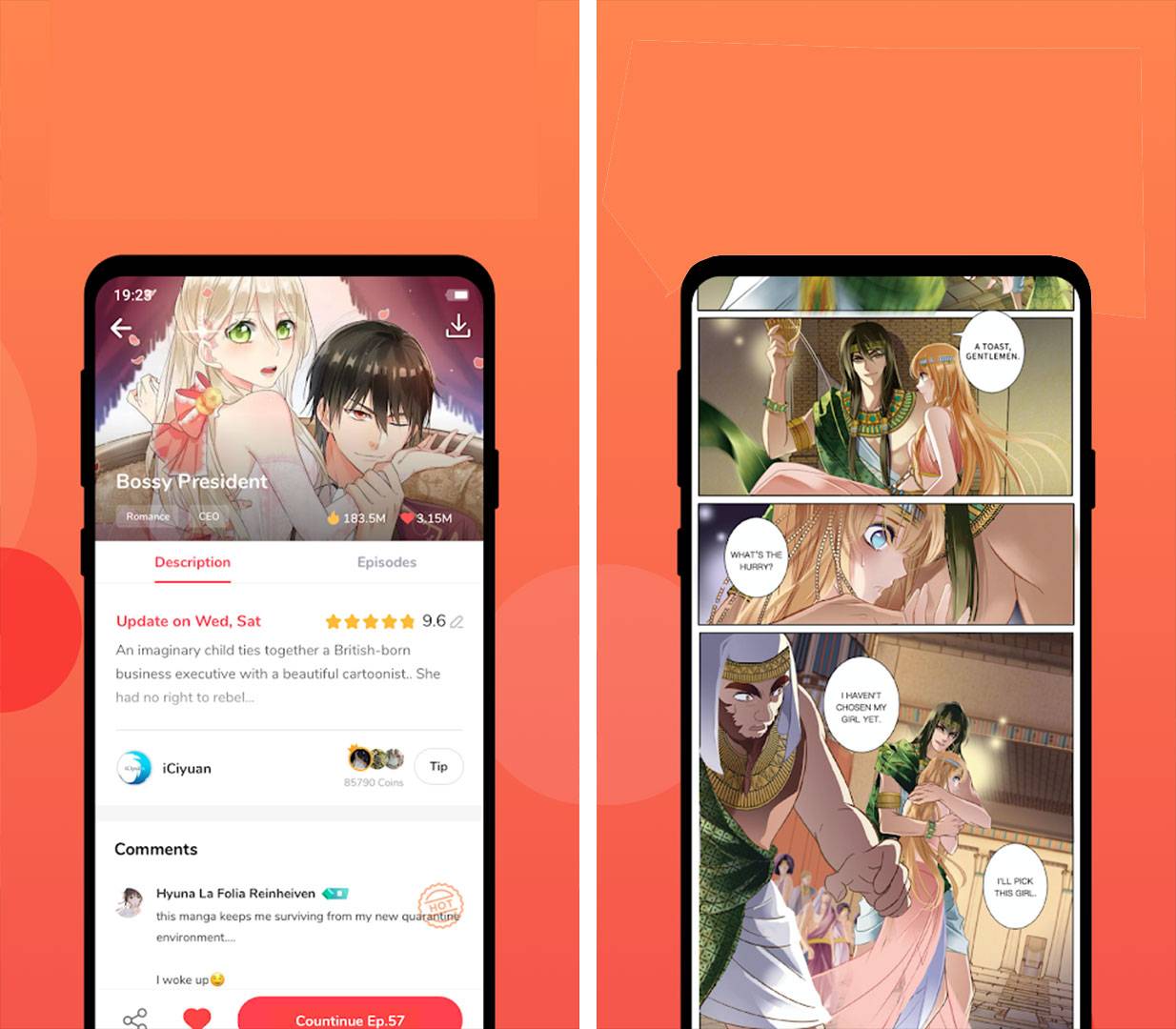 Any manga enthusiast must have heard about Manga Toon. MangaToon is a free app for reading manga, comics, manhua, as well, as manhwa. It has different genres of manga in Action, Romance, Boys’ love, comedy, horror, and more. Also, it is updated daily.

Price: Manga Toon is completely free to download and even offers a few free comics. But, to unlock paid episodes, you’ll have to purchase coins. 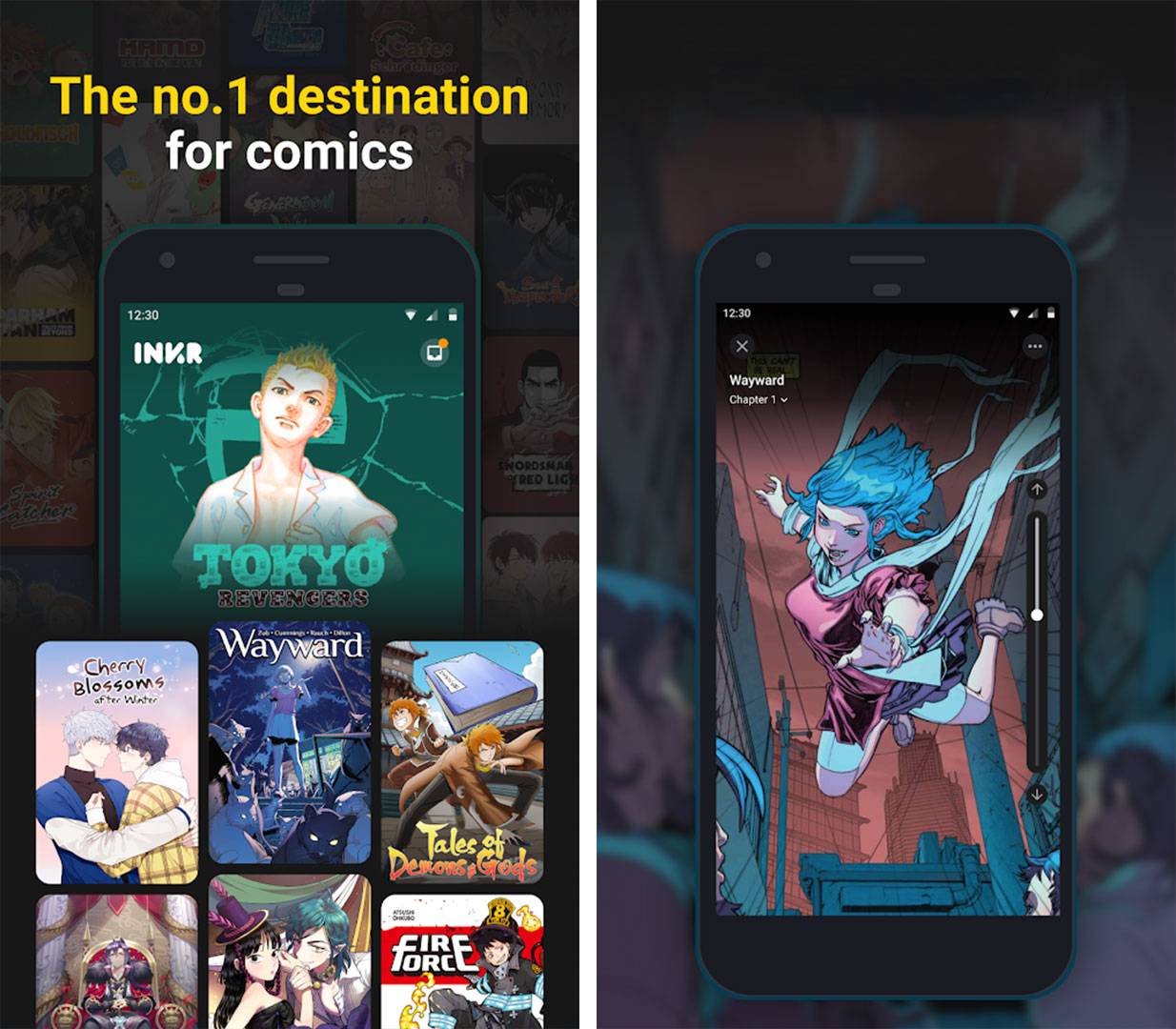 With INKR Comics, explore a diverse library of officially licensed manga, Webtoon, manhua, and comics. You can access its wide range of genres, including action, romance, comedy, horror, drama, Isekai, a slice of life, sci-fi, and many more. And you don’t have to search for anything manually because it examines your reading habits and gives personalized recommendations. 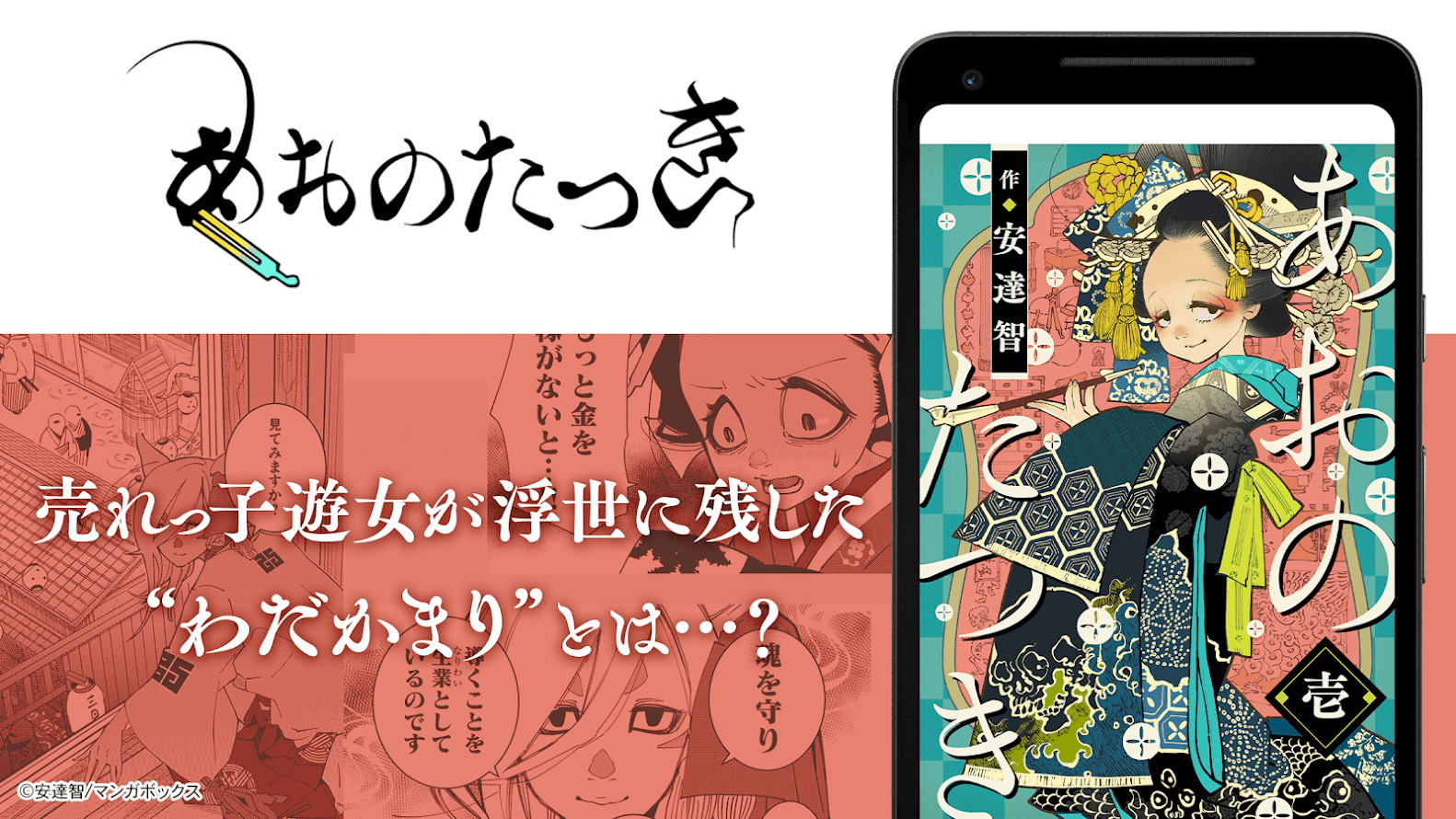 Manga Box has one of the largest catalogs of books by several popular authors. Here you will find almost every manga title that you want to read.

This app seamlessly adjusts the document image to the screen so that you can see and read the manga without any visual artifacts. And what makes it more interesting is that you don’t have to spend any money. You can read your favorite manga for free with this best free manga app. 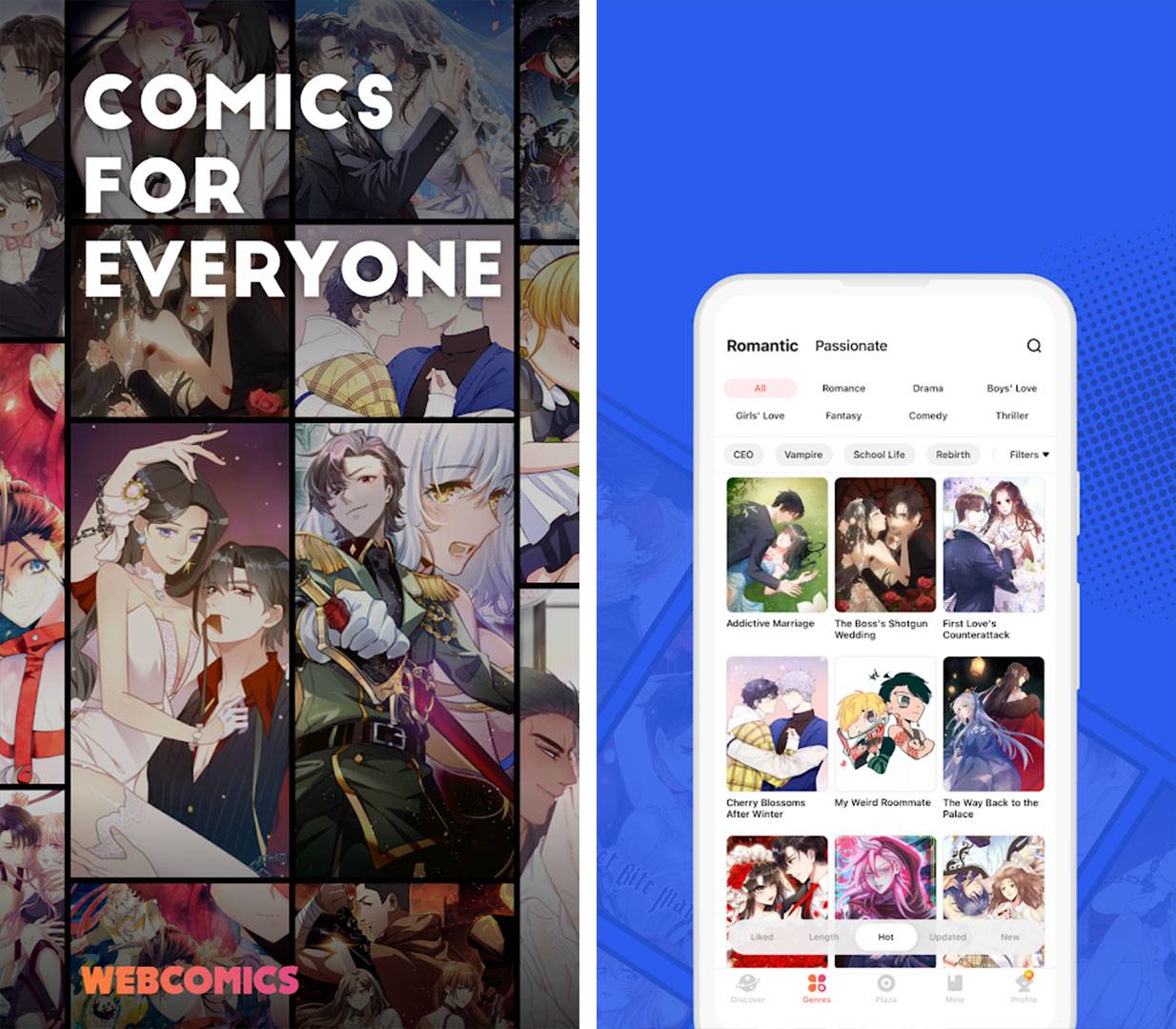 WebComics is an excellent app for people who love reading comics of all genres, including romance, fantasy, drama, horror, BL, comedy, and more. Its various new services and features make it more prominent than its competitors.

9. Manga Plus by SHUEISHA 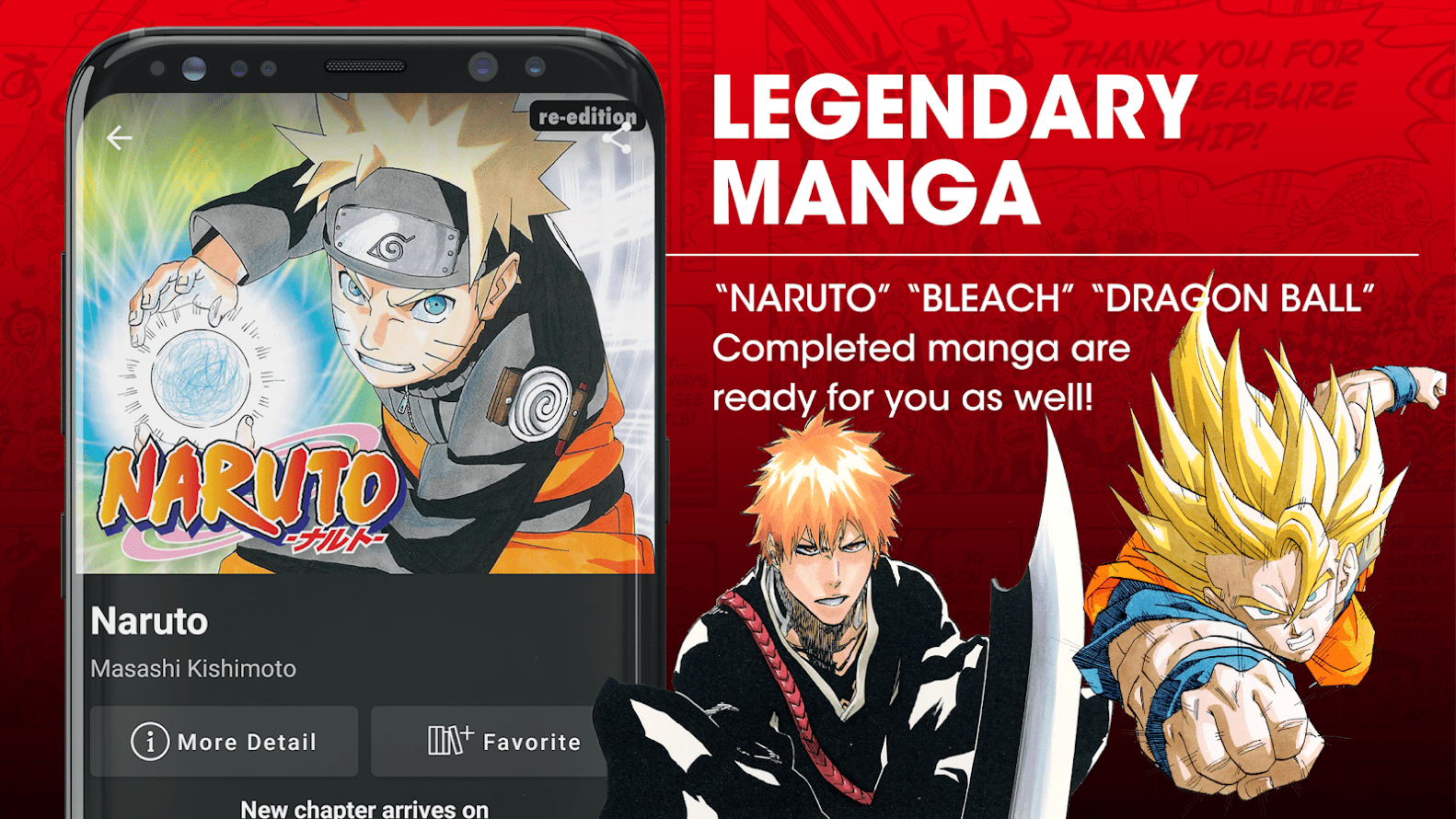 Now, the next manga reading app you should probably check out is Manga Plus by SHUEISHA. It publishes translated versions of new chapters from the currently serialized manga in Weekly Shonen Jump. Not only that, but it also offers almost every Shonen Jump title, whether it be Naruto or Jujutsu Kaisen! 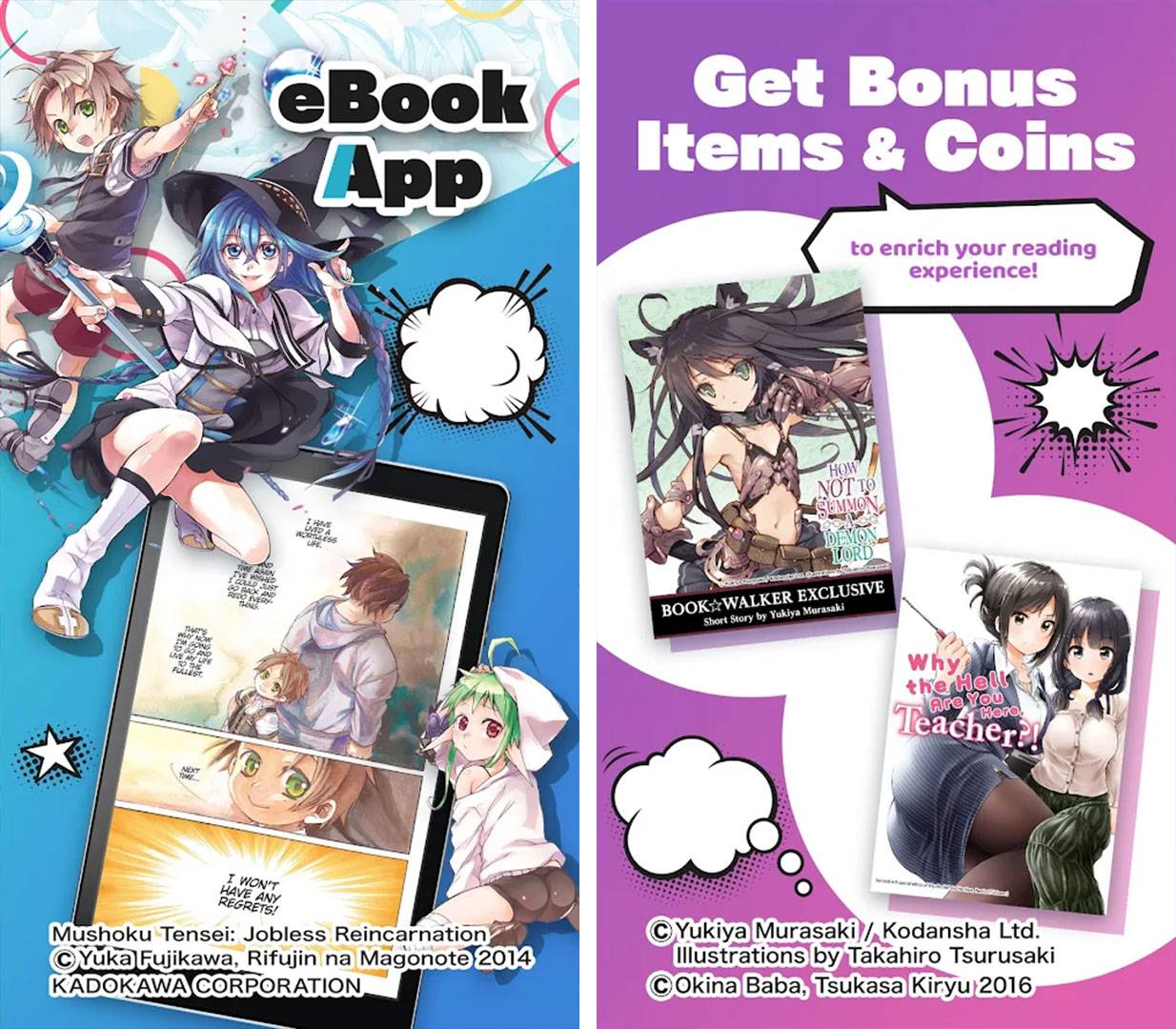 With Book Walker, you can access an extensive catalog of the exclusive light novel and manga eBooks, as well as short stories. It not only offers exclusive purchase bonus items like illustrations. But it also has regular giveaway promotions on its social media with amazing prizes, like Book Walker coin, author signature, and more. 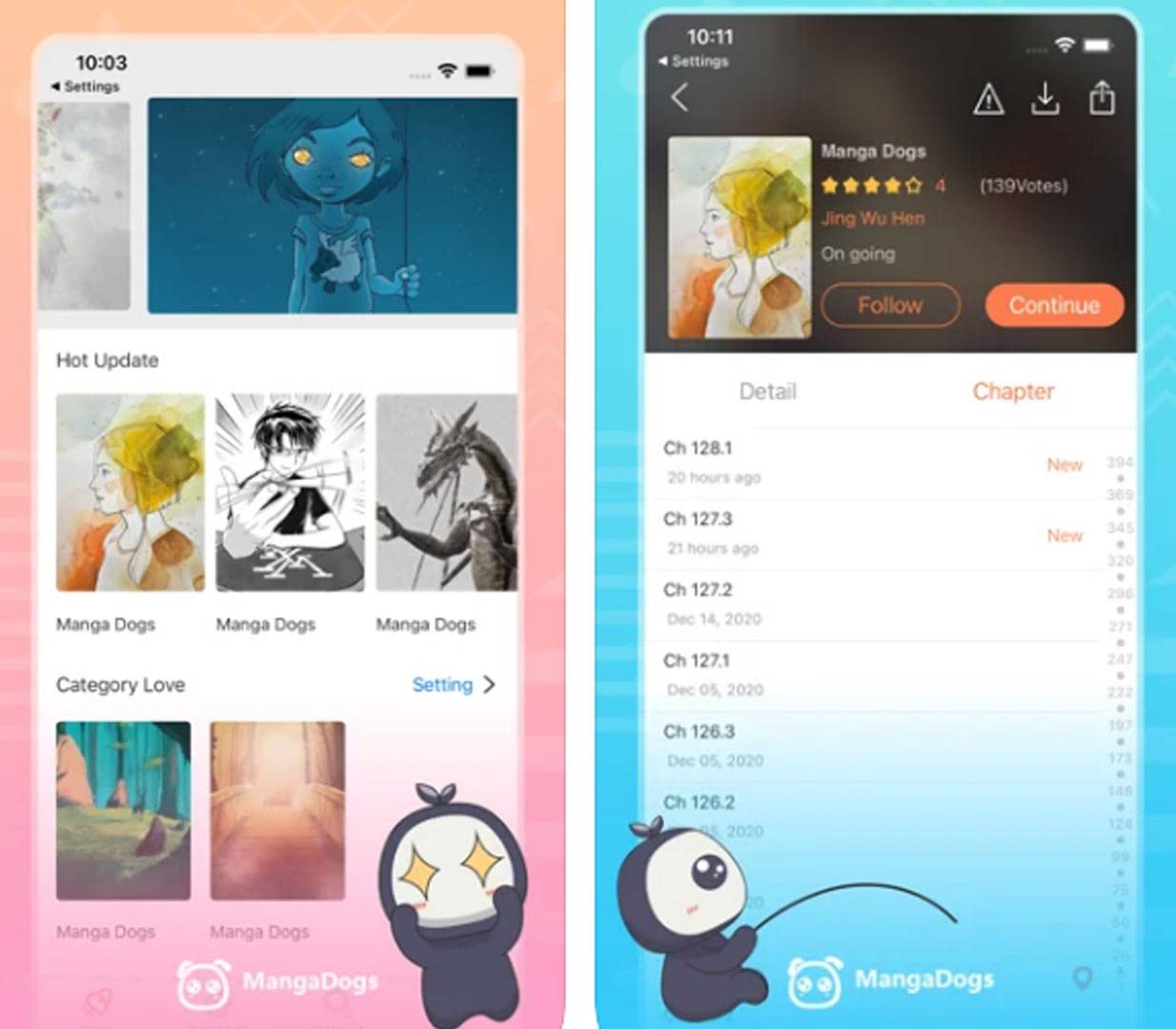 Manga Dogs is an exclusive iOS app that lets you follow your favorite manga and even discuss it with fellow manga fans. Find out what others are reading and get recommendations on the manga you’ve previously read. Similarly, you can also organize your favorite manga by using the bookshelf feature and keeping a tab of your reading history.

Price: Choose between the $5.99 full-featured app or a free, ad-supported version with fewer features. 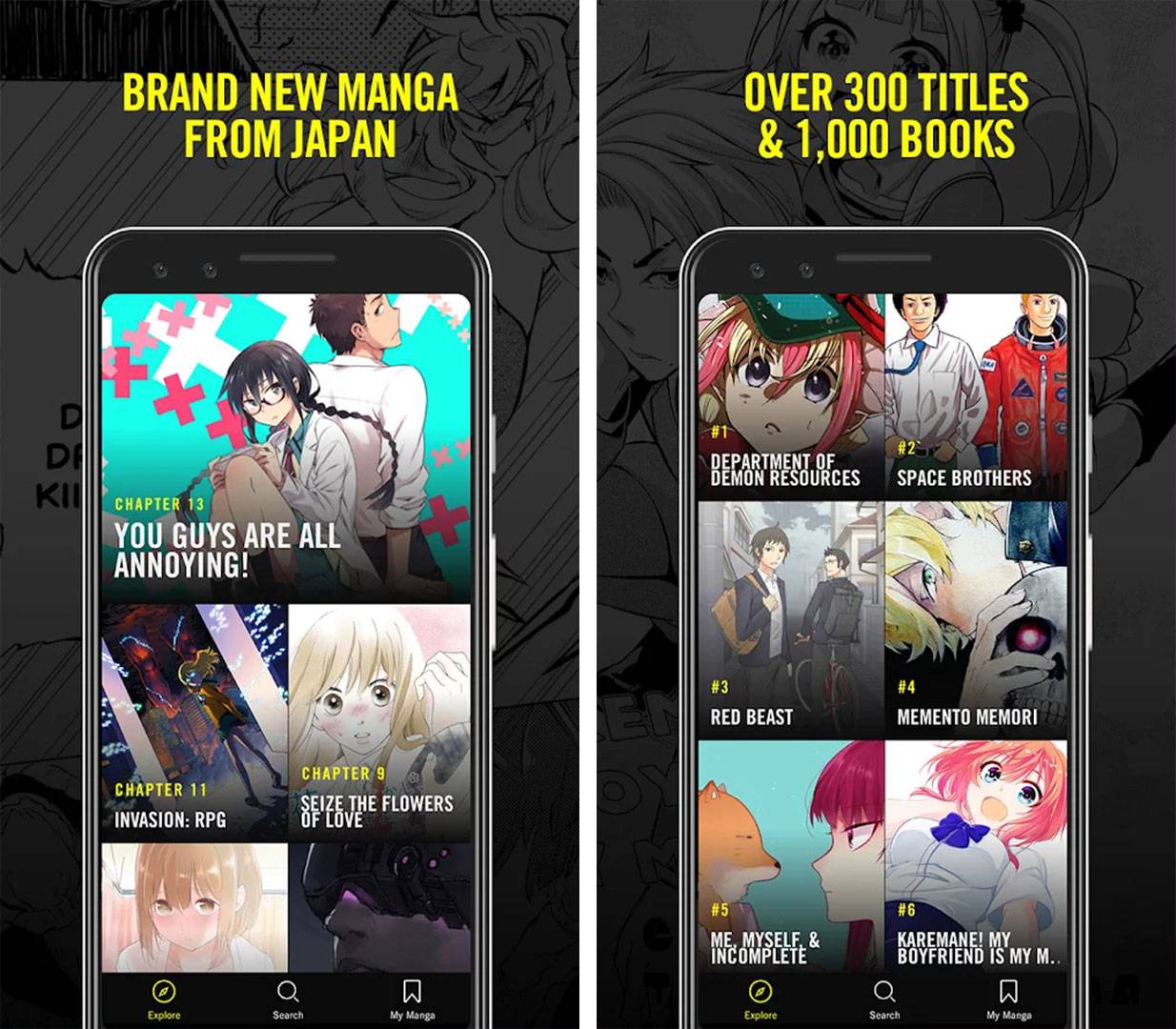 Mangamo states that it is the first mobile manga subscription service to offer unlimited access to many titles. You can access over 300 titles, including mega-hits, mangamo originals, manga based on current anime hits, new-award-winning series, and many more. Furthermore, the most prominent thing about Mangamo is its ad-free content. Hence, don’t worry anymore and get yourself immersed in your favorite manga without getting interrupted.

Price: You can access its membership for only $4.99 a month, or start your 30-day free trial. 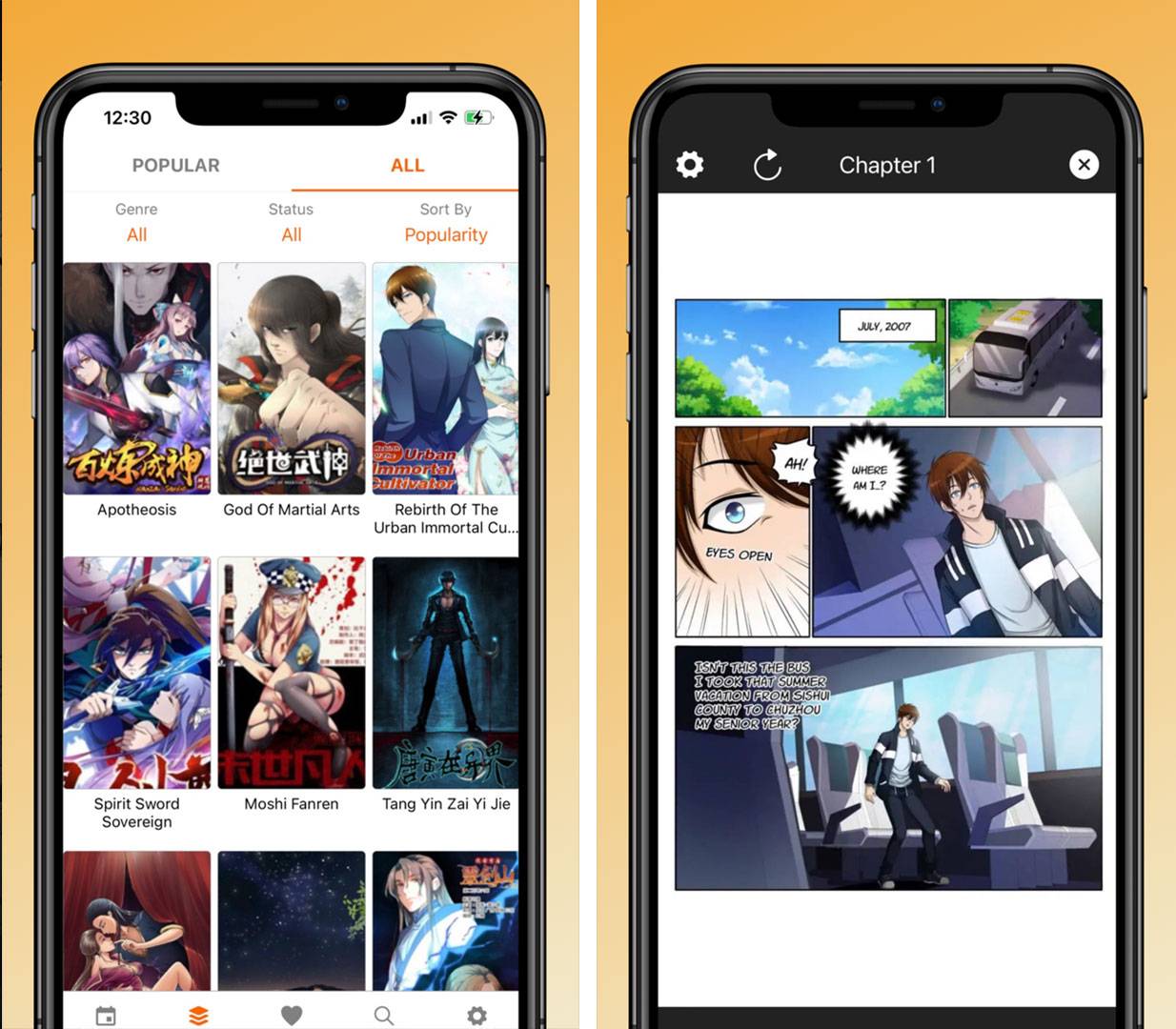 Manga Zone is specially designed for manga lovers like you. It has thousands of manga for free. So, all you need to do is to download the Manga Zone app on your device and enjoy its smooth and uninterrupted reading experience. However, it is available for iOS and Android devices. But you can’t download it directly from the Google Play Store. For downloading Manga Zone app on Android, you’ll have to grab its APK from their official website. 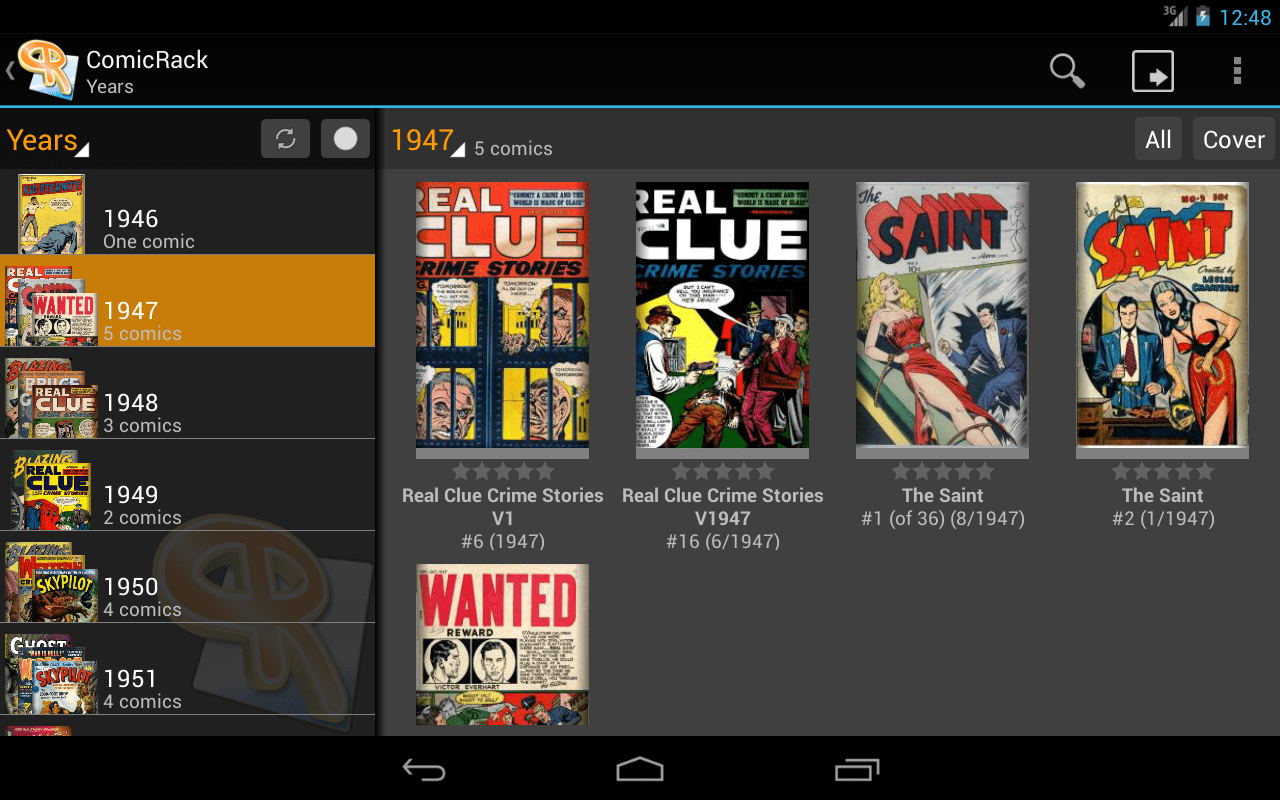 Last but not least, Comic Rack for Android and Windows is one of the most versatile apps in terms of cross-platform reading. The significant part about this app is its reading tools and providing automatic synchronization between your Android device and Windows. Also, you can read your favorite comics in all formats, including CBZ, CBR, CB7, CBT, PDF, and DJVU.

Price: You can choose between the $7.99 full-featured app or a free, ad-supported version with fewer features.

Well, that’s it for now. These are the top manga apps that you can try out! All these apps for iOS and Android devices offer an amazing manga reading experience and have a clean user interface. And if you have any suggestions, please let me know in the comment section about the worthy applications that might miss in this list. 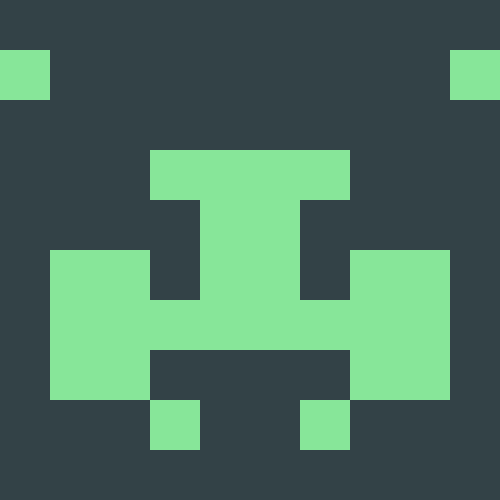