Youtube App for smartphones gets Autoplay on Home feed! 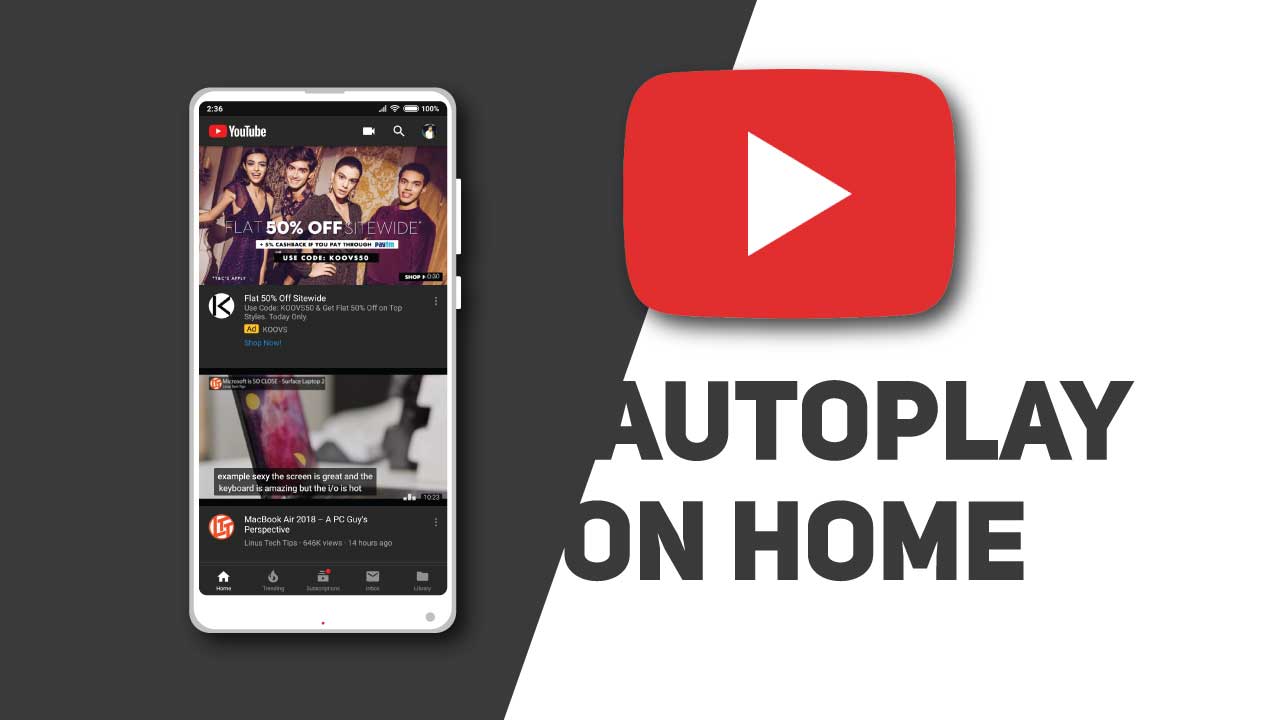 Earlier this year, Google has announced a preview feature on Youtube’s website. This preview feature allows a user to see some excerpts from the video whenever they hover the mouse cursor over the video thumbnail. Soon after that, they have started testing a similar feature on the Youtube App for smartphones but with a different approach. This new feature ‘Autoplay on Home‘ will auto-play the videos on your home feed without sound & with captions.

Autoplay on Home is now live on the latest version of the YouTube app & is enabled by default. The videos on the Home feed of your YouTube app will now start playing video without sound. Since watching a video without sound is senseless, it will show captions instead while playing the video. This feature is available on both Android & iOS. According to Youtube, this feature will give you a better experience of the video in the mobile view. Since the whole video is getting played, it will also add up to the video view & will consume a significant amount of internet data. YouTube has also given an option to enable Autoplay on home on WiFi only.

Read more about all Hidden features of the Youtube App on Android!

Now some you may find this feature annoying & feels like it’s been forced upon them, luckily you can disable this feature by following the instruction below.

How to Disable Autoplay on Home inside Youtube App?

1- Open the YouTube app & tap on the Profile picture on the top right of your app to get inside the profile page.

2- Now inside the Profile page, tap on ‘Settings‘ then on ‘Autoplay‘ & lastly tap on ‘Autoplay on Home‘ to see option related to it.

3- Now all you need to do is, select ‘Disable‘ to disable AutoPlay on the home feature permanently. But if you would like to stop it only on Mobile data, you can choose ‘WiFi Only‘. Once it’s done, videos on your home feed will stop auto-playing while scrolling. (You can follow same on Youtube app for iOS.)

Wrapping up: How to Disable Autoplay on Home inside Youtube App?

Youtube app has been getting a lot of new features lately, however, the most asked ‘Background playback‘ is lost somewhere in the update pipe line. YouTube App users will love to see that feature in the future so that they can listen to their favorite video in the background.

Until then we can enjoy what Google has to offers in bits & pieces. Or get our hands on modified YouTube apps that support background playback.

What do you think about this Autoplay on Home feature? Do let us know via a comment.
Good day.

Anubhav Bhatnagarhttps://mrnoob.net
Your friendly neighbor, who spend most of his time in learning and sharing what he has learned to everyone. He is a fan of flat design and is into minimalism. Also, a huge Xiaomi critic and enthusiast. Connect with him @AnooBav on all social platforms.

So it's been one huge week for the free...
Read more

How to connect Airpods to Windows PC?

No doubt that Apple Airpods works best within the...
Read more

So it's been one huge week for the free...
Read more

How to connect Airpods to Windows PC?

No doubt that Apple Airpods works best within the...
Read more

How to Watch Netflix Together Online with Remote Friends in 2021 on Android,iOS and PC

How to add Dropbox to File Explorer on Windows 10?