How to Screen Record on Windows with Audio?

Windows still don’t have a built-in Screen recording tool that lets you record the screen on your PC or laptop without any caveats. While it seems like a big red flag, there are a few workarounds and third-party tools you can use to record screens on your Windows PC/Laptop with audio.

Whether you are using the latest Windows 11 or Windows 10 or older versions like Windows 7 or older, you can use this list to find the best screen recorder tools/apps for your use case. All the screen recorders mentioned in this list are free, don’t leave any watermark, and have no recording limitation.

With that out of the way, let’s see all the methods that you can record the screen of your Windows PC or Laptop.

How to record Screen on Windows 11?

Microsoft introduced Game Bar in Windows 10 as a tool for gamers/streamers to monitor, record, or broadcast/stream their gameplays. But you don’t have to be a gamer/streamer to use Game Bar. It’s free, and anyone can use it for recording screen (or window?) on Windows 10 and 11.

The caveat? Since its intended use is for recording games, you can’t use it to record desktop or file manager. Or record a specific part of your screen. You are bound to record the whole app/game window when you use Game Bar for the recording screen.

Now let’s see how to use the Xbox game bar to screen record on Windows.

After you finish recording, you can find all your recorded screen footage inside.

OBS studios is a free, open-source screen recording and streaming software professional’s use. It’s feature-rich and gives the user plenty of options to control how the output of their recorded videos will look. So if you want something advanced to record your Windows screen, OBS Studio is the way to go. The setup may look overwhelming, but once everything is in place, recording the screen using OBS is a buttery experience.

Here is how to setup OBS Studios to record/capture the screen of your Windows PC or Laptop.

OBS Studio is now ready for recording/capturing your screen. Click on the “Start Recording” option under “Controls” to start recording your computer screen with audio. 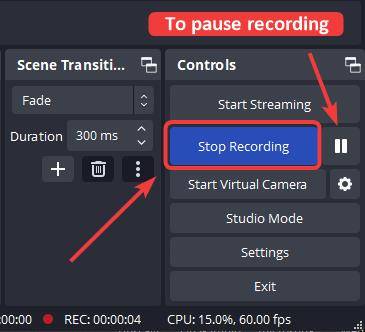 If you want to record a particular app window, select “Window Capture” option instead of “Display Capture” and then on the next screen choose the app windows you’d like to record.

You can find your recorded files inside.

ShareX is a popular open-source screenshot app that happens to have a screen recording feature in it. If you are already using ShareX to take screenshots on your windows computer, you might as well consider using it for the recording screen on your laptop or PC.

Here is how to screen record on Windows using ShareX;

And that’s how you use ShareX to record screens on Windows. The process, however, is a bit lengthy. But you can always speed it up by assigning hotkeys to start/stop the recording screen.

Tip: Turn off online uploads, and change your default saving destination, before you use ShareX to record the screen on your computer.

CamStudio is another free, lightweight open-source tool that you can use to record your computer screen. Unlike other tools mentioned in this list, CamStudio has a simple old-school UI that anyone can easily navigate around, just like that old portable audio recorder. One button for each; play/stop, pause, and record, with the option to change the output video format. It also lets you select the recording area; you can go full screen, windowed, or select your region.

It might take a few seconds before you can play your screen recording. Also, I suggest you set the video format to MP for better compatibility by tapping on the “Star” button.

Also read: How to take Mac OS-like screenshots on Windows?

Here is how to use PowerPoint to record screen on your laptop.

And that is how you can use the record option inside Microsoft PowerPoint to record the screen on your windows Laptop or PC.

Wrapping up – Record screen on Windows 10 and 11 with Audio.

Recording screen on Windows is a straightforward task with the right software tools. You can use the built-in screen recording tool to record the screen of your PC or Laptop. Or you have to use one of the free screen recorder software like OBS Studio or ShareX. Both are free to use and do the job very well.

How to get gesture navigation on any Android phone?

How to Change App Icons and Widgets on iPhone and iPad and Customize them Easily? [Updated 2022]