Who doesn’t love giving opinions & what’s better than getting paid for giving your valuable opinions? If you are someone who has no issues sharing their opinion on the internet, then the Google Opinion Rewards app is the one you should check out. Google Opinion Rewards is a survey program by Google, where anyone above 18 years can register & start filling surveys to get some rewards against it. These surveys are short & straight forward. All you need to do is, fill those surveys & you’ll be rewarded instantly. (in most cases) Do note that this survey program is limited to few countries as of now & Google has published a list of all those countries. (Click here to know if you can signup for Google Opinion Rewards in your country) The rewards you’ll get will be in the form of Google Play Credit or Paypal if you are an iOS user.

So without wasting any time, let’s get started with the setup & make some money off our opinions.

How to install and setup Google Opinion Rewards App!

After successful download, you need to provide some of your personal information (Name, DOB & Address) so that Google can get an idea of who you are & what kind of surveys should make sense to you. After setting up everything perfectly, all you need to do is to wait for your first survey. You’ll receive a minimum of 1 survey every week, for which you’ll get notified. Each survey has a validity of 24 hours, if you failed to complete it in the given time frame you’ll have to wait for next week’s survey. Most surveys require 5-10 seconds to fill & while others may take up to 20-30 seconds. You’ll receive your rewards after completing the survey. The idea behind the app is very much simple, Google will push weekly surveys to get your opinion on that & will reward you against it. This reward is the small token against the honest opinion you are providing to Google via those surveys. A survey can be a general survey asking about a particular brand or service, that you are using or have used in past or might give you surveys based on the places you’ve visited or based on your internet activity. Surveys mainly consist of single/multiple-choice questions & sometimes, they might ask your opinion directly without giving any sort of choices/options.

Believe me or not, this is the only survey app that’ll provide you rewards instantly. $1.00 is the maximum, you’ll get after filling a survey. However, the amount of reward will vary with each survey. Each survey is different, usually, the long surveys provide you the highest reward. The payment scenarios are a bit different on both the smart phone OS platforms. In iOS, your rewards will get transferred to your PayPal account after it reaches $2.00 in your Google Opinion Rewards account.

And in the case of Android, you can use those accumulated rewards as Google Play Credit to buy anything off Google Play Store. However, in some European countries, you’ll get rewarded via PayPal on Android, just like iOS. (Check the below screenshot for Indian Google Opinion Rewards user) 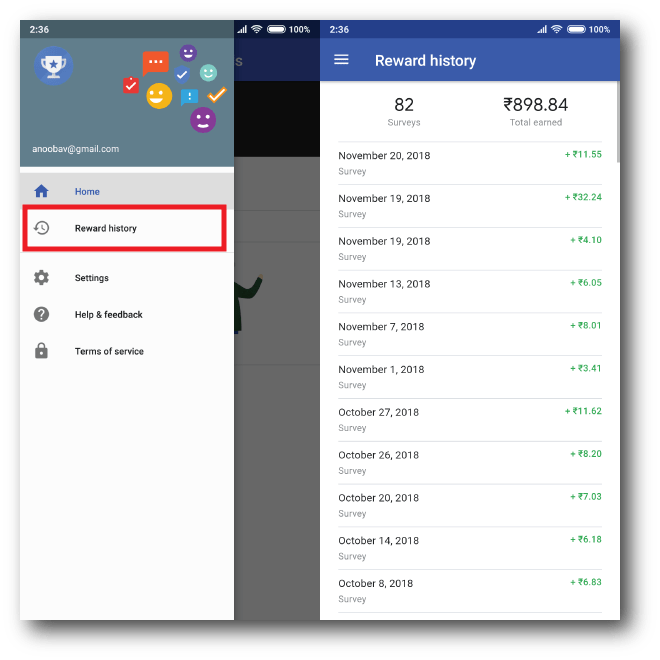 I am not getting weekly surveys, this app is fake!

Some of you might be struggling to get surveys on their smartphones & might have uninstalled the app saying it’s fake. However, it isn’t the case since this app is legit & gives regular surveys on the regular basis. You can follow the below-mentioned tips, to start receiving a survey & make some money off your ‘valuable’ opinions.

2- One survey per week is the minimum you will get on this app. However, if you want to get more surveys, you should consider enabling Google Location History for the account you are using to get surveys. This will allow Google Opinion Rewards to send you surveys based on your location. Suppose, you paid a visit to a nearby restaurant, you’ll definitely get a survey related to that location & if that’s not enough, such kind of surveys have the maximum payout. (You need to keep GPS on your smartphone) 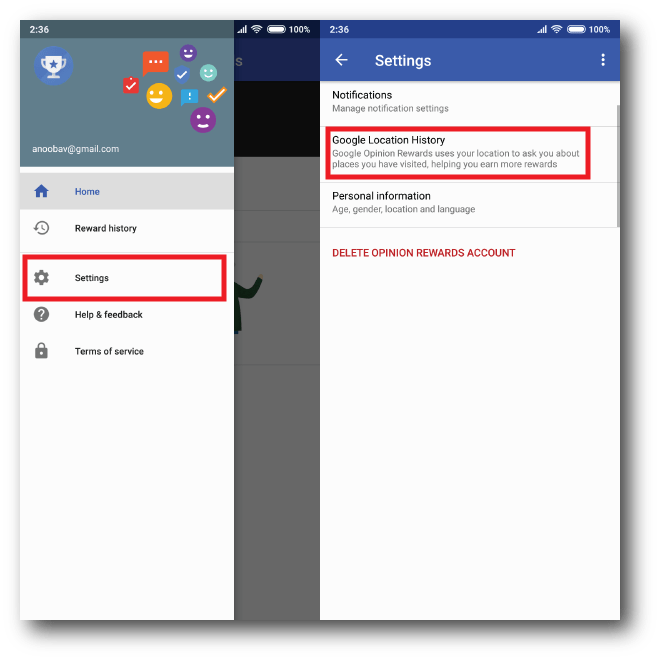 3- Always try to give an honest opinion by going through each & every question asked in the survey. This will not only make that survey legitimate but also gives Google the correct information to analyze for use.

We know that this app is not something you can rely upon for easy instant money nor this app will make you any rich overnight. Yet the reward you get is pretty enough to get some of the content over Google Play store. If you are an Android user, you can use the reward (Google Play Credit) for buying Apps, Games, Music, Books, or Movies in Google Play Store.