Our smartphones are the most used entity in our daily lives. From making a call to texting a friend or scrolling your never-ending Instagram timeline; they are designed to keep us busy. As soon as you unlock your smartphone, you feel the urge to open every single app and get yourself busy in it.

From making a call to texting a friend or scrolling your never-ending Instagram timeline; they are designed to keep us busy. As soon as you unlock your smartphone, you feel the urge to open every single app and get yourself busy in it.

If Digital Detox, Minimalism, Distraction-free are the kind of words that resonates with your lifestyle. Using the very source of distraction, which is your smartphone, does seems to contradict with that lifestyle.

Recently, A European smartphone manufacturer Blloc, known for its extremely minimal smartphone Zero 18, announced the release of its Ratio OS launcher to other android devices. Ratio OS is aimed at redefining the smartphone experience following the idea of minimalism. They are achieving this by minimizing the home screen clutter and giving the user a simple UI to interact with. Ratio Launcher as it seems is being perfected to individual devices so that it can blend with it perfectly.

Read more: Digital Detox and how to start with it?

Do note that, currently it’s only available for selected OnePlus and Pixel Devices; for other devices, you can choose the other option and look for your device model. If your device isn’t listed then you can request further with your exact device name to request an invite.

There is no ETA mentioned about when you’ll receive an invite, which is a bummer. So if you require a minimal launcher right away, then have got you covered. There are plenty of minimal launchers in Google Play Store that are aimed at making your smartphone distraction-free. However, the list here is quite long so we have tested a bunch of Ratio Launcher Alternatives for you that claims to be minimal or distraction-free.

Ratio launcher is out of beta now, which means you no longer have to wait for an invite to install Ratio launcher on your device. Just go to the below link and download the Ratio launcher directly via Playstore as a regular Android launcher app.

Also Read: How to Install Blloc Ratio Launcher on Any Android Phone? 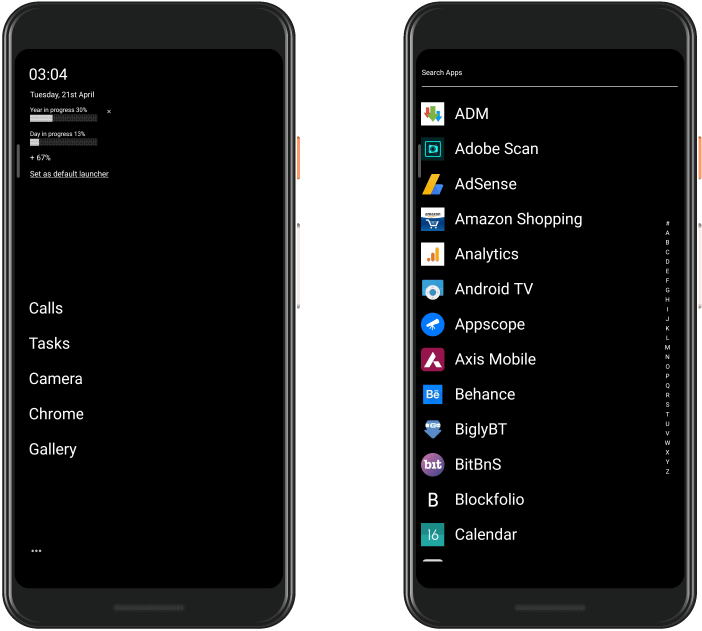 The first one on our list of Ratio Launcher Alternatives is the Indistractable Launcher. Indistractable is fairly minimal with just a home screen and app drawer. The home screen lets you add the most-used apps and shows you the basic information such as clock and calendar. It also shows you your year and day progress in percentage. You can also change between a light or dark theme; it’s planned to get more themes and an option to add wallpaper.

Indistractable the launcher is in the early access stage, so bugs are expected but the developer is actively taking feedback and fixing them. In simple words, it is a feature-rich minimal launcher.

Get Indistractable Launcher on the play store. 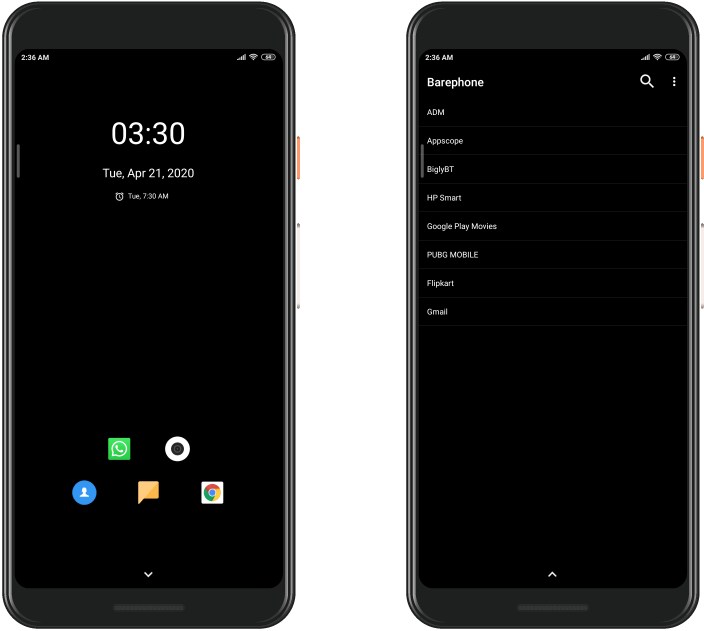 Do you hate it when you see that huge app list on your phone, you’ll never use and can’t uninstall? Well, Barephone is just the answer to that question. Barephone is a minimal android launcher that gives you control over which apps you want to see on your phone. And that’s all you have with this launcher, nothing fancy, it is a bare minimum which makes it a worthy Ratio Launcher Replacement.

Get Barephone on the play store. 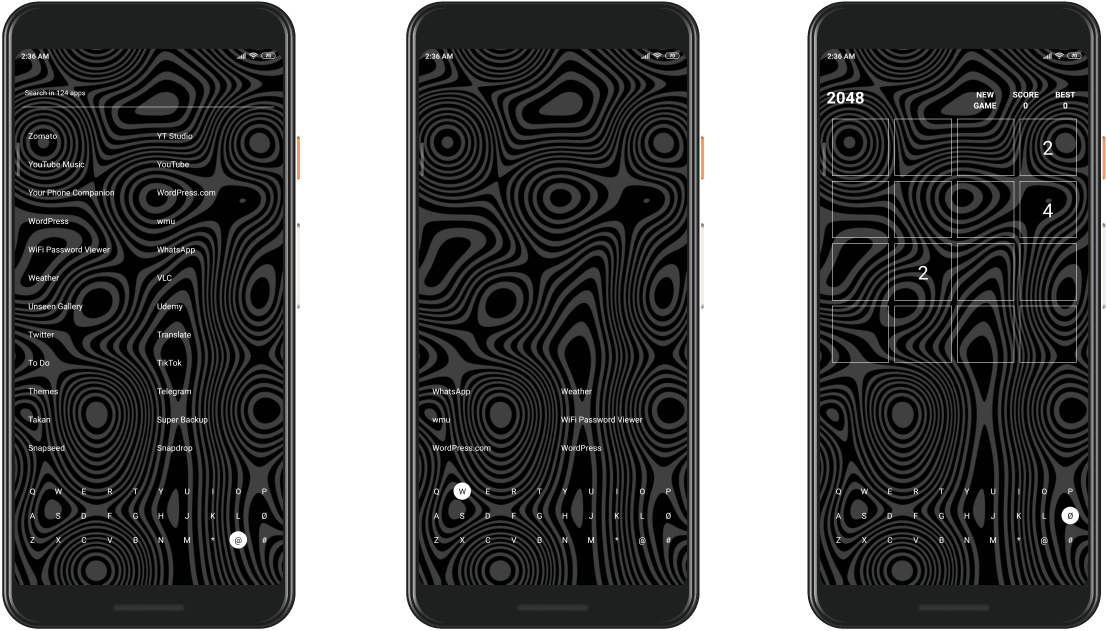 Takan Minimalist Launcher is taking a different approach as a minimalist launcher and the keyboard warrior in you will like it. The whole launcher is a transparent UI with a keyboard at the bottom. All you have to do is press the key on the keyboard to filter the app starting with that letter. Takan Launcher gives you an option to change font color and background transparency. And if boredom strikes, just press Ø (Slashed O) key to play the 2048 sliding block puzzle game. Isn’t that cool?

Get Takan Launcher on the play store. 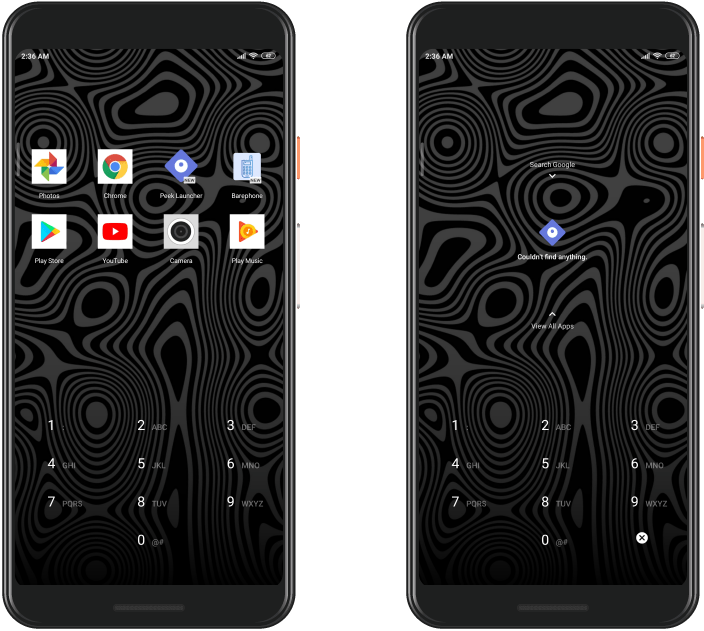 Fancy the old T9 keypad? Peek Launcher is all you need. Just like Takan Launcher, Peek launcher offers a keypad-based home screen that lets you look at apps by pressing the T9 Keypad and it will show the corresponding app on the home screen. You can open Google Search by swiping down on the home screen and swiping up will show all your apps. Peek launcher uses machine learning to show apps based on user usage behavior.

Get Peek Launcher on the play store.

5- Before Launcher | Minimalist launcher for focus 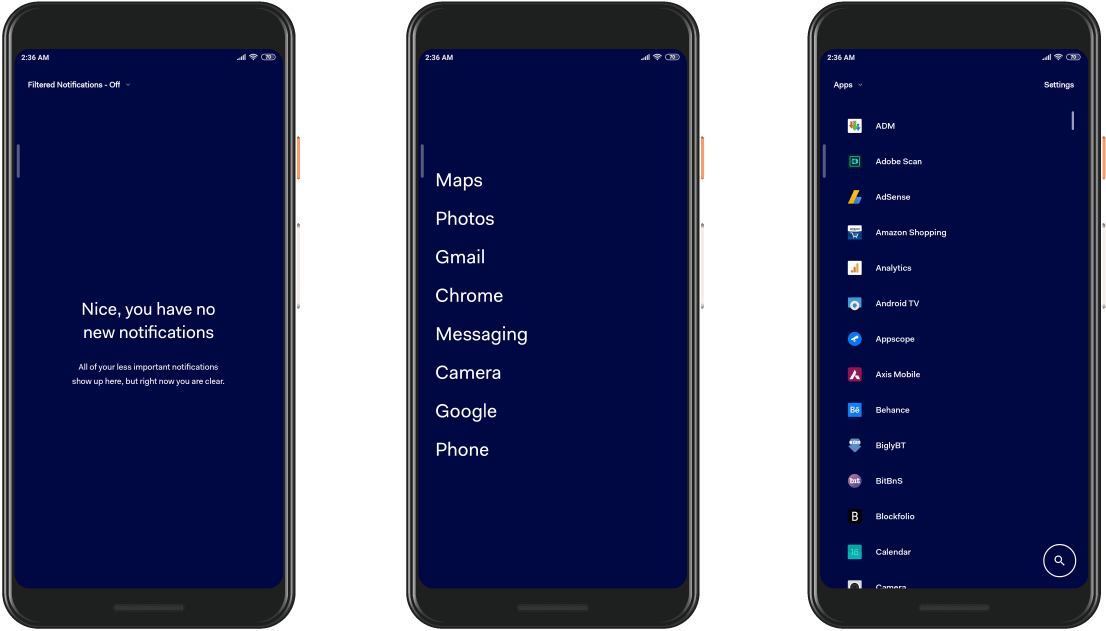 Notifications are annoying and cause distraction. If you agree with this, Before Launcher is the one for you. Before launcher allows the user to filter out useless notifications. You can access your filtered notification by sliding from the left of the home screen. While sliding from the right will open your app drawer. The home screen shows your frequently used apps based on your usage with date/time on top.

Get Before Launcher on the play store. 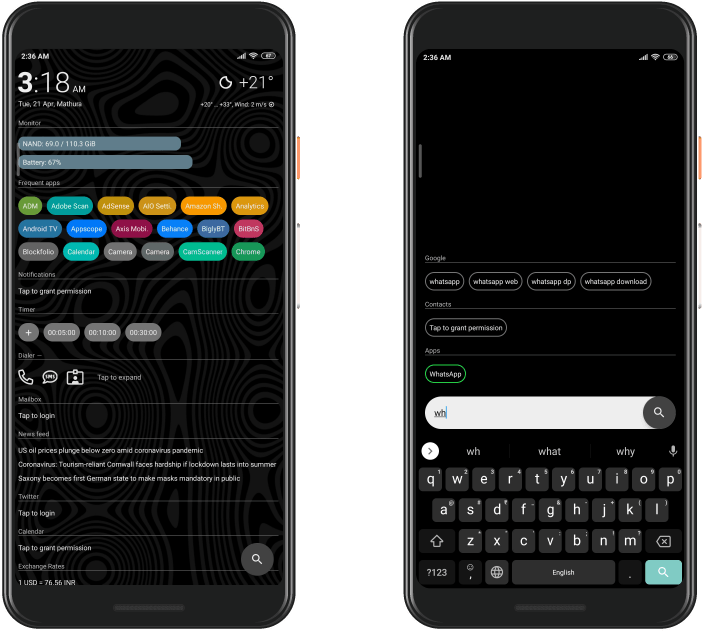 It’s truly the AIO or All-in-one minimalist launcher. A launcher that I can’t recommend enough to someone who doesn’t want to go beyond their smartphone’s home screen. AIO Launcher shows every important information on your home screen. The whole home screen acts as a group of widgets that you can easily customize from the launchers setting. AIO launcher has plenty of nifty features and you have an option to buy a pro version to unlock more advanced features.

Get AIO Launcher on the play store.

Fresh, clean, and snappy is how you can define Niagara Launcher. Started as a small project called Wave Launcher, Niagara launcher has come a long way down. You can access your apps by sliding your fingers on either side of the screen. Niagara Launcher lets you interact with your notifications directly on the home screen. You can also add android widgets in this launcher. You will love this launcher if you want to give your Android phone a fresh minimalist look making it one of the most balanced Ratio Launcher Alternatives out there in the market.

Get Niagara Launcher on the play store.

Every minimalist launcher is designed to limit the overuse of our smartphone. It solely depends upon the individual choice on which android launcher is keeping them distraction-free. Ratio launcher is definitely a step up in this direction and I am keenly waiting for its invite for my device. What about you?

If we have missed out on any minimal launcher or you are rocking an interesting launcher that we should try? Do let us know via a comment.